Watching TV entertainment news people trying to get a handle on complex subject matter to create that light segment before the weather forecast can be painful viewing. The item on the news I caught earlier today made me want to hide behind the sofa. It was trailing the new Brian Wilson documentary, ‘Long Promised Road.’

Interviewer: ‘What is the real Brian Wilson then? What do people need to know?’

Ask a stupid question eh.  It’s not the only daft question that was asked, but it’s enough to be getting on with. However, because he is a very smart human being, Brian’s answer redirected the interview and drew the viewer’s attention back to what mattered, the songs.

It’s such a fundamental point that gets overlooked in most media interviews I have to endure. The most important factor is the songs. It’s all we really care about on a Tuesday night and it’s the only thing I really want to talk to artists about when I get a chance to record interviews. How did the song arrive, what were the background factors and how did it end up sounding the way we heard it first?: The only questions that really matter.

On this week’s show we will ask some of those questions retrospectively as we pay tribute and draw attention to the songwriting craft of Dallas Frazier who died on the 14th of this month at the age of 82. I arrived too late at my love of country music to know much about Dallas Frazier’s life but again, I know his songs. And what a song catalogue he has. 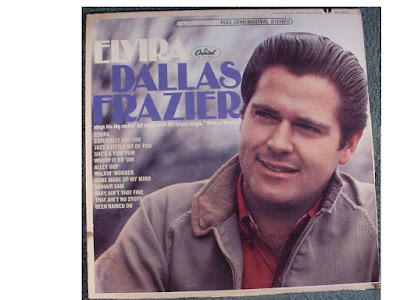 A prodigy of Ferlin Husky who picked him to win at a singing contest in Bakersfield, California when Frazier was only twelve, he had recorded and published his first song by the age of fourteen. In the fifties his career consisted of appearing on the Hometown Jamboree TV show as a regular contributor until he scored a No1 Hit with Alley Oop. It started a phenomenal songwriting career which took off seriously when he moved from LA to Nashville in 1963.

On this week’s AC we’ll spin you some tracks which you will know and a few you don’t. Safe to say that Elvis, George Jones, Gram Parsons, Emmylou Harris and Tammy Wynette have all enjoyed success with Dallas Frazier songs and only last year, Connie Smith, recorded, “I Just Don’t Believe Me Anymore.” We feel certain you’re going to enjoy going down this particular rabbit hole.

We also have some great new things to play you. Listen out for two Scottish troubadours, Dean Owens and Roseanne Reid who both debut new songs for 2022. We will also look forward to Country to Country 22 with songs from Callista Clark, Luke Combs and Tenille Townes.

It’s two hours of country music our way all starting at five past eight this Tuesday evening on BBC Radio Scotland (all frequencies) and on BBC Sounds at a time and place of your own choosing. Join me if you can.